Stew vs Soup – What’s the difference?

Just like the bone broth vs stock debate, stews and soups can fall into the same company. They are similar but not exactly the same; the differences between them are so small you might not be able to tell them apart. Below, we break them down in the hope that it might help you during your next batch of meal planning.

Soup and stew use the same base of ingredients, but there are actually two ways to distinguish one from the other.

While a bowl of either hearty dish will contain a warm, gut-soothing and satisfying bone broth at its base, soup generally has more of a liquid texture with stews generally containing less liquid.

It’s made with a combination of ingredients like vegetables, meat, or fish that are well-covered with water or stock, brought to a boil, and then simmered to extract flavour.

A stew is any dish that’s prepared by literal stewing – that is, the food is covered with only a small amount of liquid and simmered for a long time in a covered pot. 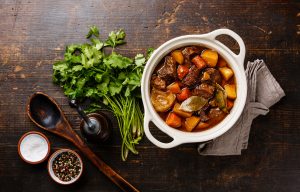 In the stew, you’ll see larger-cut ingredients: from meaty cuts of beef or chicken, quarters of potatoes, and halved green beans are covered with our award-winning, delicious bone broth to bring the flavours together.