In honor of World Food Week, we’re off to Morocco for today’s’ recipe, where tagine is defined by a galaxy of spices, nuts and dried fruits. The dish gets its name from the stone pots in which it originated in the 9th century; those are optional for our recipe, but remember, the first thing you need as always is your endlessly versatile Sadie’s Kitchen! 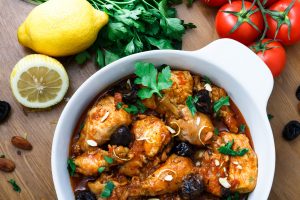 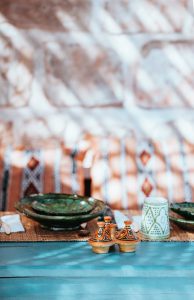 Preheat the oven to 180C
Heat the oil in a heavy-set casserole dish, with a lid
Lightly fry the chicken until golden
Add the onion, carrots, ginger and garlic for 2 minutes
Then add the cayenne pepper, paprika, black pepper, turmeric and cinnamon for 1 minute
Add the tinned tomatoes, apricots, dates, sultanas and saffron
Pour in your Sadie’s Kitchen bone broth and bring to the boil
Immediately reduce, and allow to simmer for 30 minutes or until the liquid reduces
Pop your lid on top and put in the oven, reducing the heat to 120C for 30mins or until you are ready to serve
Once ready, sprinkle with the fresh coriander and parsley and serve straight from the pot

Tip: Serve with rice and thick crusty bread, to mop up all the delicious flavours