Welcome to the first in our series of #SadiesWorldCupKitchen!

To mark the beginning of the 2018 World Cup in Russia, we are bringing you some of our favourite broth-infused international recipes. And what better place to start than in the home of this year’s hosts!

This brightly-coloured dish originated in the south-west of Russia in the 16th century, before making its way across the entire continent. Much like Dublin Coddle, it is said that every Russian mother has her own special Borscht recipe. There is a lot going on with borscht; it gets its bright pink colour and earthy base from the main ingredient, beetroot, while the unique mix of sweet and sour notes in the flavour comes from a mix of honey and vinegar.

Russia’s World Cup campaign kicks off today, but this recipe for borscht featuring Sadie’s Kitchen is already a winner! 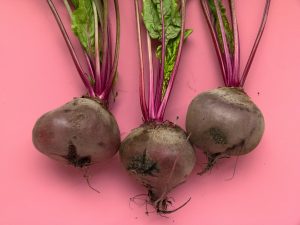 What to do:
In a pan, melt the butter and saute the bacon, onion, celery and carrot until tender
Add the red cabbage, bay leaves and dill for 1 minute
Add in the potatoes, beetroot and parsnip
Cover with Sadie’s Kitchen, water and tinned tomatoes
Add vinegar, honey and salt
Bring to boil and then reduce to simmer for 30 minutes 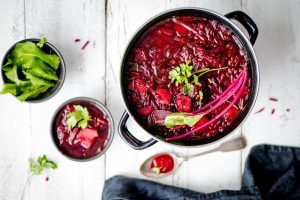