It wouldn’t be much of a World Cup Kitchen without an appearance from champions Germany, where we’re rustling up a captivating goulash. From its origins in Hungary, it spread across eastern and central Europe over thousands of years, where there are dozens of local varieties. One common ingredient, including in this German take on the simple meat and veg stew, is copious amounts of paprika! Germany are looking to make it a double at the World Cup, but you will definitely be going for seconds here! 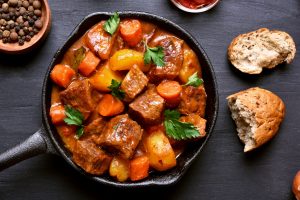 What to do:
Heat the butter in a large pot and brown the bee, then remove to a bowl
In the same pot, add onions and garlic and saute until the onions are tender
Deglaze the pan with the red wine
Add the bone broth and remaining ingredients
Season well
Bring to boil, then reduce heat to a simmer and cover
Simmer for at least 1 hour, although as with all good stews, the longer the better!